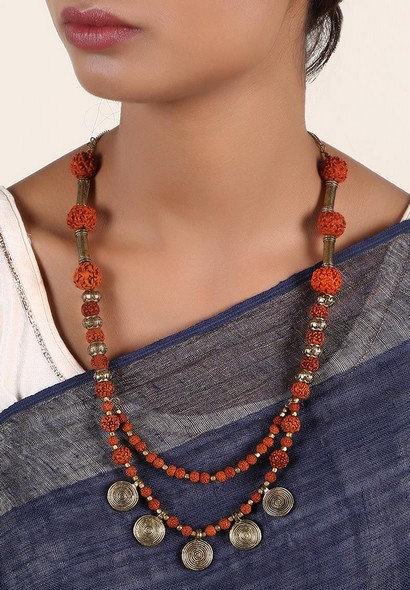 Rudraksha is a powerful gem that involved both spiritual and fashionable outcomes. Nowadays, accessories like Rudraksha have started reaching a higher usage rate due to its elegant and classic appearance. Numerous people around the world undoubtedly wear it for its look and mythical power believed to exist within it. Understanding more about that precious gem will make us want it more.

Rudraksha comes from two words, “Rudra” and “Aksha.” The Sanskrit word “Rudra” means Lord Shiva and the word “Aksha” means eye. In Hindu mythology, the angry Lord Shiva is called as Rudra. As per mythology, a particular kind of bead that has eyes and the one that Lord Shiva wore is named Rudraksha.

From the ancient time, the chain made of Rudraksha is used as prayer beads in Hinduism. But time has changed. The fashion taste of people also changed. People are using Rudraksha to upgrade their fashion. Like utilizing them in the pendant, bracelet, bangles, neckless, rings, etc.

There is a myth that the Rudraksha has supernatural powers. This power helps in fighting against the bad energy, the illness and protects us from all the evil forces.

Modernization of the Gemstone

The people of western countries are started to love Rudraksha without knowing its power. Basically, they like to wear Rudraksha mala as it looks different from other gems stones. There are many types of Rudraksha out of which 8 Mukhi (face) Rudraksha is the rarest one and the most powerful one. The people all over the world use Rudraksha gem in Pendant, because there is a myth that it worked better when someone wore it as a pendant.

Nowadays Rudraksha is becoming a new fashion statement. The women started to wear Rudraksha in their pendant as it looks elegant and stunning. Women prefer combining Rudraksha and gold beads for the neck, while men prefer wearing them either as a small neckpiece or bracelet. As we all get bored of wearing the same gems stone with the same style. Rudraksha works as a “ray of latest fashion” in our daily accessory statement.

Most of the people around the world wear them as accessories, without understanding which type of bead is suitable for their astrological chart. But that’s beginning to change.

In the market there are different types of pendants available. In those days, antique jewelry, oxidized jewelry, silver jewelry, and Afghani jewelry were in trend. A smart assemble of Rudraksha with these materials made an innovative creation. That is how fashion begins. Similarly, Rudraksha hit the market when combined with precious metals and fashionable pieces of jewelry.

From the very ancient time to this 21st century Rudraksha has always been in the priority list of every Indian woman. Not because of its power but also of its beautiful texture. Rudraksha is becoming so much popular in every part of the world. The texture and color is the cause of the sudden popularity.

There is a saying that fashion repeats itself. And here is one of the instances, like Rudraksha ruling the fashion world now. Specific beads or gems like Rudraksha never become outdated. So if you want to purchase the so-called powerful and mythical gem that looks stunning enough to match with all of your attire, then go for it. You can wear it as long as you want and still, you will look fashionable by all means. The effect of Rudraksha is permanent and never-ending in terms of power and fashion.