Starting back in the 1900s as The Grand Prize, the US Grand Prix has a long and colourful history. It has travelled across the country, visiting the likes of California, Las Vegas and Detroit. Interest waned in the 90s, but the US Grand Prix returned in 2000 at Indianapolis. 7 years later, the US was once again without a Grand Prix, until 2012, when it made its long awaited return at the Circuit of the Americas. 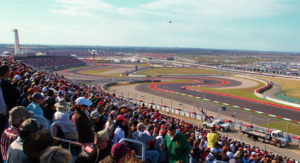 In 2012, over 100,000 people piled into the purpose-built Circuit of the Americas, in Austin, Texas, for its inaugural Formula One race, which was won by Lewis Hamilton.

As the first purpose-built Formula One track to be used in the US, the circuit boasts some impressive facilities, including a huge banquet hall and conference centre, countless executive suites and its own dedicated medical facility

Also built with the spectator in mind, the main grandstand boasts exceptional views of the finishing line, main straight and the pit lane. With the track rising to the first turn, it really is a truly stunning arena. There are also five other grandstands around the track, each offering their own unique view and atmosphere. There is also the first F1 Paddock Club in the United States, for the person that wants to go for that real extravagance.

While the price of tickets in the F1 paddock are higher than the other grandstands, the VIP benefits make for a very tempting indulgence. An open bar, four course gourmet meal, access to the support race paddock, celebrity appearances, entertainment and driver interviews among others. Tickets for the F1 paddock are available from several vendors online, such as https://edgeglobalevents.com/f1-paddock-club/united-states/.

Ironically, no American driver has won the US Formula One Grand Prix, despite its long history. Lewis Hamilton has recorded the most US Grand Prix victories, with six wins, which is one more than Michael Schumacher managed in the early 2000s. The lap record is held by Sebastian Vettel, who despite his quick time, has only actually won the Grand Prix once.

With 20 corners, the Circuit of the Americas has one of the highest number of bends of all the current Formula One tracks. It has an average speed of 208km/h and each race consists of 56 laps.

Why Driving Lessons Is Vital For A New Driver

How the right wheel alignment machine can help improve your driving

What to Look For in Car Hoist Sales and Repair Services